From the New York Times  A version of this article appears in print on August 31, 2014, on page ST1 of the New York edition with the headline: Hillary Clinton’s Gay Rights Evolution.

EAST HAMPTON, N.Y. — The crowd of supporters stretched around Main Street on a busy Saturday in August, hundreds of Hamptonites curving past the Ralph Lauren and Tiffany & Co. stores, waiting patiently to greet Hillary Rodham Clinton.

Hillary Clinton and Howard Dean at a book signing for her “Hard Choices” in East Hampton, N.Y. CreditSonia Moskowitz/Getty Images

Mrs. Clinton had taken a break from her beach vacation to sign copies of her latest memoir, “Hard Choices.” Her presence transformed BookHampton, the bookseller the Clintons frequent on their working summer vacations, into a sort of pre-campaign event with Secret Service agents, and well-wishers including Martha Stewart and Howard Dean.

The shores of Long Island are not exactly a proxy for the enthusiasm Mrs. Clinton may find on a nationwide presidential campaign. But among the many gay couples in the crowd, a refrain emerged.

It’s a sentiment often expressed as gay voters mull what Mrs. Clinton’s potential 2016 presidential campaign would mean for gay rights. In her four years at the State Department, she prioritized international gay rights, including a 2011 speech in Geneva in which she urged countries to accept gays and lesbians. In the year and a half since she left her post, she has made gay rights a focus. Last fall she accepted an award at the Elton John AIDS Foundation gala in New York; the singer praised Mrs. Clinton’s efforts for human rights. 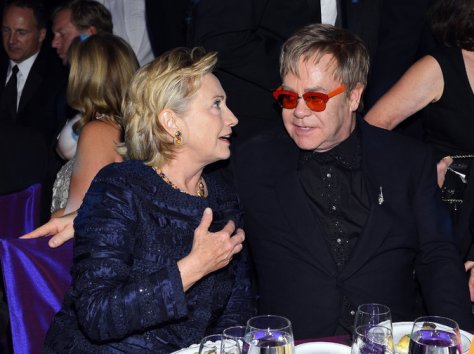 In June, at the Aspen Ideas Festival, Mrs. Clinton denounced Russia’s treatment of lesbians, gay men, bisexuals and transgender people. In March 2013, she released a video endorsing same-sex marriage both “personally and as a matter of policy and law.”

The efforts have endeared Mrs. Clinton to many gays and lesbians who are raising money toward her potential run. But others look back on the policies of the Clinton Administration and question why it took Mrs. Clinton so long to get on board.

Don’t Ask, Don’t Tell and the Defense of Marriage Act, the 1996 measure President Clinton signed into law that barred federal recognition of same-sex marriages, are widely viewed as among the most significant setbacks the gay rights movement has encountered.

“She wasn’t at the back of the pack, but was she out in front with a banner? No,” said Tom Sheridan, a lobbyist who works on H.I.V.-AIDS policy. The Economist put it more bluntly, calling her “belated conversion” to support same-sex marriage “cautious to the point of cowardice.”

So far, Mrs. Clinton does not have an easy answer as to where she stood in the 1990s. An interview with NPR’s Terry Gross in June to promote “Hard Choices” turned awkward when the Defense of Marriage Act came up. Ms. Gross pressed Mrs. Clinton on whether she supported same-sex marriage as first lady but backed Mr. Clinton’s policies for political expediency.

“For me, marriage had always been a matter left to the states,” Mrs. Clinton said. As for whether she supported same-sex marriage when she was in the White House, she said, “I think I’m an American, and I think we have all evolved.”

For some gays and lesbians, the exchange opened old wounds.

“She was not just another evolving American,” the author Andrew Sullivan wrote on his website, The Dish. “She was the second most powerful person in an administration in a critical era for gay rights.” In Slate, Mark Joseph Stern wrote that her “apparent position on gay marriage — leave it to the states — is about as progressive as Dick Cheney’s circa 2004.”

A spokesman for Mrs. Clinton declined to comment for this article, but pointed to a CNN interview in which she said that marriage “should be available to everyone regardless of who they love.”

To a generation of younger gay men in particular, Mrs. Clinton’s appeal extends to a more primal connection. Her ability to come back after a bruising defeat by Barack Obama in the 2008 Democratic primaries appealed to gay men, many of whom had also weathered setbacks.

“We get her like we get our moms,” said Fred Sainz, a spokesman for Human Rights Campaign, an advocacy group. “We’ve seen the travails she’s been through and the fact that she’s not just a survivor but a conqueror.”

Richard Socarides, a Democratic strategist, gay rights advocate and White House adviser to Mr. Clinton, said, “People see her as a survivor and someone who despite her many, many gifts and blessings, survived some personal and political setbacks and persevered in the face of them.” That, he added, “is very appealing to gay Americans because it’s a shared experience.”

When it came to choosing a Halloween costume after the contentious 2008 Democratic presidential primaries, the decision for Robby Browne, a real estate broker in New York, was simple: a blond wig and an orange Calvin Klein pantsuit like the one Mrs. Clinton wore when she endorsed Mr. Obama at the Democratic convention. Mr. Brown, who is among Mrs. Clinton’s prominent gay donors, had told the former first lady he planned to dress like her.

“Without skipping a beat, she said, ‘Be sure to shake a lot of hands,’ ” he recalled.

Ready for Hillary, an independent group that aims to build grass-roots support for Mrs. Clinton, has signed up tens of thousands of supporters and sold “Out and Ready for Hillary” rainbow T-shirts at booths at 28 gay pride festivals and on college campuses nationwide.

For Mr. Browne, 66, Mr. Clinton’s 1992 campaign was a major break from the Reagan and Bush years.

“When the Clintons came along and said the word ‘gays’ at the ’92 convention, I felt like I existed,” said Mr. Browne, who lost his brother to AIDS.

The gay rights movement has made major strides since Mr. Clinton signed the Defense of Marriage Act. While gay activists said there was still much work to be done on making same-sex marriage legal in all 50 states, safeguarding against workplace discrimination and advancing transgender issues, they were hopeful that by 2016 both parties’ nominees would accept, if not wholeheartedly endorse, same-sex marriage. Next year, the Supreme Court is expected to decide the constitutionality of the same-sex marriage bans that exist in 31 states.

That means Democrats can no longer rely on the built-in support of gay voters. Such voters still skew liberal, but polls show they are not without ideological diversity. Republicans see an opening with leaders like Senator Rob Portman of Ohio, whose son is gay. “I find it difficult to see all these Democrats celebrating Hillary Clinton coming to the marriage equality game as late as she did, when Republicans came to the marriage equality game late, too,” said Gregory T. Angelo, executive director of Log Cabin Republicans.

Freedom to Marry, a nonpartisan group, is working to recruit young Republicans who support same-sex marriage to become delegates and help “get anti-gay language out of the platform in 2016,” said Evan Wolfson, its president.

Chad Griffin, the president of Human Rights Campaign and a former Clinton aide, said, “It’s going to be difficult for any candidate, Democrat or Republican, to not support full equality in 2016.”

Activists said the gay-rights movement has a tendency to embrace supporters, rather than cast judgment about when a politician got on board. After all, in the 2008 primary season neither Mrs. Clinton nor Mr. Obama supported same-sex marriage. They mostly split the gay vote.

“The L.G.B.T. community is, in some respects, very forgiving,” said Sarah Kate Ellis, president of Glaad, a nonprofit organization (formerly known as the Gay and Lesbian Alliance Against Defamation) that does not endorse candidates. “We’ve seen our own family and friends evolve around us so it’s not out of context to see a politician evolve as well.”

Regardless of what Mrs. Clinton believed in the 1990s, most activists interviewed said she had emerged as a forceful advocate at the State Department, devising policies to help gays and lesbians abroad and in the Foreign Service. And her speech in Geneva marked a major turning point in a movement that is increasingly focused on discrimination in countries where same-sex relationships are illegal.

“In one fell swoop, she changed the entire global playing field for gay rights,” said Mr. Socarides, the Democratic strategist.

The speech also sent a message to activists in the United States. Mrs. Clinton “might not be as quick as others but once she’s there, she’s committed,” said David B. Mixner, an author and Democratic donor. “I think she’s grown into a forceful advocate for L.G.B.T. rights, especially internationally.”

Others said there was a collective yearning among gays for a female president that has little to do with Mrs. Clinton’s superficial Liza-appeal.

Mr. Mixner noted that it was often lesbians and straight women who supported gay men through the AIDS epidemic. “There’s a very strong bond between the feminist community and the gay rights community,” he said. “It’s a real symbiotic relationship and it diminishes it to say we’re supporting her in some Judy Garland way.”