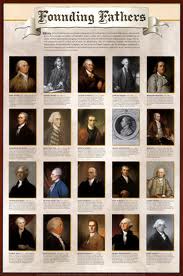 Portraits of our Founding Fathers

The has been a lot of conversation and debate lately about our founding fathers. The heroic revolutionaries who decided that these colonies must break away from England and become a Republic and there had to be freedom here. These men were very different from those who are in government today. They were actually willing, may I go so far as to say, they looked forward to fighting and gaining our independence. They were a brave and very diverse group of men. 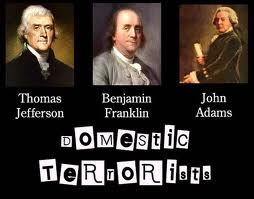 America was imagined and created by men who were liberals and revolutionaries.

The original words of our founding fathers found in the Constitution, Bill of Rights show us a picture of men who were radicals for their day. The entire idea of what they wanted to create here was liberal and so very radical. The founders were a kind of motley crew. I say this with no disrespect meant. They were a group of rather unlikely idealists. They also were imperfect. Some were slave holders, Paine wrote anti-slavery pamphlets and Benjamin Franklin organized the first anti-slavery societies.

Women were never on their radar, even after the famous letter Abigail Adam’s wrote to her husband John Adams. “If particular care and attention are not paid to the ladies, we are determined to foment a rebellion and will not hold ourselves bound to obey any laws in which we have no voice or representation.” Despite Abigail Adam’s efforts, our rights weren’t up for discussion.

The Founding Fathers were not uniformly Christian, they were freethinkers, agnostics, atheists, Christians, Freemasons, and Deists. A Deist professes belief in as-yet-unknown powers evinced in the natural, scientifically observed universe. But whether they were religious or not, they fought for a secular state and for freedom of belief.

The question of slavery was the only big issue they were unable to find a solution for. However, it ended up being left out of the Constitution and they agreed to leave it to later generations to solve this divisive problem. So, as you know, Lincoln was the man who picked up the gauntlet and freed the slaves and held this union together.

These Founding men were radical and liberal.

After the first Constitutional Convention, Benjamin Franklin was asked what type of government the Founders had chosen. Franklin replied, “We have given you a republic—if you can keep it. I believe we must never give up. 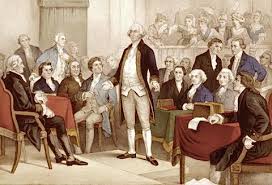 Original sketch of the drawing up of our Constitution

Part of this blog has been excerpted from Fighting Words, by Robin Morgan.