Jack Hunter, a top aide to Senator Rand Paul (R-KY), allegedly tried to have dozens of his own columns removed from the Internet.

According to an editor at the Charleston City Paper, Hunter asked for his own columns to be deleted because they “no longer reflected his current worldview.” Editor Chris Haire said he would have considered removing a few questionable columns, but Hunter was seeking to have a “cowardly” amount of his writing removed.

“It was solely for appearances only,” Haire said. “It was not heartfelt. It was not true. It was simply to protect his boss, Rand Paul, as he plots a path to the White House in 2016.”

The Washington Free Beacon, a conservative publication, reported earlier this month that Hunter was a neo-Confederate who celebrated John Wilkes Booth’s birthday. He believed the southern Confederacy was correct to secede from the United…

From her own lips.

Walt Whitman was one of the forefathers of the great 20th century poets, authors and artists.  He was truly born under a creative star, and his light shines down on us to this day.    I thought I would take this chance to share his light with you.

not to-day is to justify me and answer what I am for,

But you,  a new brood, native, athletic, continental, greater than before known,

Arouse! for you must justify me

I myself but write one or two indicative words for the future,

I but advance a moment only to wheel and hurry back in the darkness.

I am a man who, sauntering along without fully stopping, turns a casual look upon you and then averts his face,

Leaving it to you to prove and define it,

Expecting the main things from you. 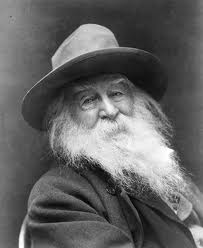 I Sing the Body Electric

I sing the body electric,

The armies of those I love engirth me and I engirth them,

They will not let me off till I go with them, respond to them,

And discorrupt them, and change them full with the charge of the soul.

Was it doubted that those who corrupt their own bodies conceal themselves?

And if the body does not do fully as much as the soul?

And if the body were not the soul, what is the soul?

— both poems by Walt Whitman, taken from Laws for Creations