But Israel is not just an ideal, it is a country, a political, democratic entity, accountable to not only its own citizens but — as the Zion of old — to all the Jews in the diaspora.

Liberal Zionism compels us to criticize Israel for her flaws

My devotion to Israel can be unconditional, even if I am critical – sometimes harshly critical — of Israeli policies that make no sense. 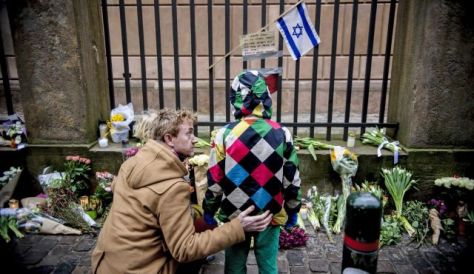 An Israeli flag and flowers placed outside the Copenhagen synagogue, February 15, 2015. Photo by AP

This is Zionism’s moment. It would be nice if the neo-cons could get it right.

In the February issue of Commentary magazine, the flagship publication for Jewish neo-conservatives, the lead article is a lengthy editorial entitled “The Existential Necessity of Zionism after Paris.” It begins as a rousing and inspirational embrace of Zionism. But alas, the piece quickly becomes simply another attempt to bash Zionists of a more liberal persuasion and to misrepresent Zionism in the process.

All of this is too bad because this should be a time for lovers of Israel to join forces. The dangers are clear to us all. European Jew haters, having slaughtered Jews in Paris, have moved on to another country and another target: Copenhagen. Which Jewish community will be next?

Jews have every right to live in France and in Denmark, of course. And if they make this choice, they are entitled to the protection of their governments. But the fact is that their ability to live in a European state — any European state — with a reasonable measure not only of security but of serenity is very much in doubt. People are out to kill them, and civil authorities have shown themselves unable or unwilling to come to their defense.

What all this means is that the Zionist founders, Europeans all, were right. Theodor Herzl, writing in 1896 of European Jews in a little pamphlet entitled “The Jewish State,” made the case succinctly:

“In vain are we (Jews) loyal patriots, our loyalty in some places running to extremes; in vain do we make the same sacrifices of life and property as our fellow citizens… In countries where we have lived for centuries we are still cried down as strangers…”

What the Jews must have, wrote Herzl, is a state of their own, and he offered a practical program to make this happen. Following the murderous lunacies of the Holocaust, that state was finally created, and Holocaust survivors and endangered Jews of Arab lands flocked to its shores. Ironically, the horrors of Nazi exterminations convinced many well-meaning people that what had happened once could not possibly happen again. Israel was a blessing, the argument went, but the world has learned its lesson, and the Jewish Diaspora is now secure.

But, outside of the United States, this was not true, and recent events in Europe have demonstrated yet again the precariousness of Jewish life. And they have made clear as well the absolute necessity of Zionism as Herzl and his successors understood it.

Herzl, Weizmann, Jabotinsky, and Ben-Gurion were realistic men with down-to-earth goals. Despite their considerable differences, they all believed that the first priority for Zionism is to normalize Jewish existence. This meant not being distracted by messianic visions or extremist ideologies but giving priority to the fundamentals of state-creation and state-building. Whatever else happened, the Jews must have the apparatus of a state, an army to fend off their enemies, and borders that would be open to any Jew, at any time, and for any reason.

And because of the single-mindedness of its leaders, Zionism succeeded. The Jews, after 2,000 years, again govern themselves, defend themselves, and provide a safe haven to Jews anywhere. Diaspora Jewry faces many challenges, but its most important task by far is defending the State of Israel. And a century from now, when historians make their judgments about the mettle of American Jewry, nothing else will matter if American Jews have not done enough to assure Israel’s survival.

Such arguments are a caricature and a joke. I believe, as the Commentary editors do, in “unconditional Zionism.” Zionism is not a fad or a flavor, to be embraced according to one’s whims. But Commentary confuses “unconditional” Zionism with “uncritical” Zionism. And this is absurd. My devotion to Israel can be unconditional, even if I am critical — sometimes harshly critical — of Israeli policies that make no sense.

No less absurd is the claim that the right is the voice of “practical Zionism.” If only it were so. The tragedy of right-wing Zionism is that it has ceased to be practical in any way whatsoever. The obsessive settlement building of the Israeli right contributes not a whit to Israel’s security and undermines her ties to allies and friends. Continued settlement building is not a practical plan but an ideology gone wild.

And no less impractical are the laughably inept policies of the Israeli right that poison Israel’s relations with the great powers, in particular the United States. Herzl and Jabotinsky, founders mentioned by Commentary as “practical,” worked ceaselessly to cultivate understandings with the great powers of their day. They believed that only such alliances could provide salvation for the Zionist movement. The arrogant dismissal by today’s right-wing Zionists – both in Israel and the Diaspora – of close, cooperative ties with Israel’s American patron is not “practical.” It is shocking and crazy.

If the neo-cons want to proclaim the existential necessity of Zionism after Paris, I’m with them. If they want this Zionism to be unconditional, I’m with them again. And I’m realistic enough to know that only a tough, muscular Zionism will suffice in a dangerous world. But the “practical Zionism” that they admire is not to be found on the right. If it exists anywhere, it exists on the center-left. And if Israel is threatened today from within, it is not by the messianic visions of the Zionist left but by the extremist ideologies of the Zionist right.

Rabbi Eric H. Yoffie served as president of the Union for Reform Judaism from 1996 to 2012. He is now a writer, lecturer and teacher in Westfield, New Jersey.