On 9 May of this year the mayor of the city of Split, Ivo Baldasar (a Social Democrat) presided over the unveiling of the monument to the 9th HOS Battalion Rafael Vitez Boban. Croatia’s communist lot, who boldly call themselves antifascists even though no antifascist organisation in the world protect from condemnation and processing of WWII and post-WWII communist crimes like they do, formed a so-called “Antifascist league”. These two events in Croatia on the same day did not occur by accident.

The communism lovers from various NGO’s are all about calling and labelling members of Croatian defence forces from the 1990’s Homeland War as fascists, maliciously and without any truth, except for communist political agenda, linking them to WWII Independent State of Croatia Ustashe! Some have even gone so far…

Following a recent groundbreaking study that reveals the uselessness of pelvic exams,  the media coverage is focusing on the continued debate between the American College of Physicians and the ob-gyns, rather than on the implications for women’s health. The Physicians group is claiming the evidence from the study is sufficient to recommend scrapping routine pelvic exams, while the ob-gyns are arguing that there is justification for maintaining the exam practice.  The debate has absorbed much of the public’s attention, but there are some important points that are being ignored in the process:

This plane had left Amsterdam just a couple of hours earlier, filled with innocent people who looked forward to their trip.

There are no survivors.

They say it got shot down.

One blames the other and vice versa.

This poem is dedicated to the victims from the Malaysia Airlines flight MH17 and their loved ones.

The bodies on the tv

The people crying near

This can’t be real

While the plane is burning

And the world stops turning

Two Boxers together, try and be the boss controlling and you are an optimist.

Our Monty (left) and Lea 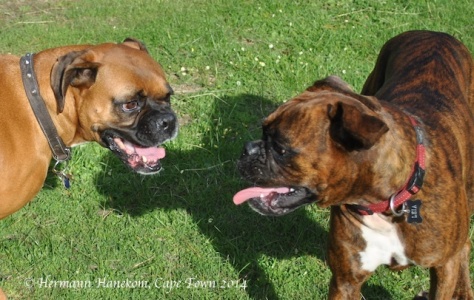 No wonder we are Boxer lovers, they are the clowns of the canine world.

Friday evening and like Boxers eight days a week let your hair down.

If you click on this link, it will take you to a video that has more information about the shoot down of Malaysia Fright 17. Information and knowledge will help international authorities to determine exactly what happened. Families of the victims and their friends need to have truth. Truth will bring them closer to closure but their grief is almost unbearable. I am quite in shock and there are unshed tears. I have a heavy heart. The families must be suffering terribly. I pray for families and victims. I pray for all of the citizens of the world who are not violent and who live moral and ethical lives.

“Death takes away the weariness of life; and the soul begins life anew.

Death is a sleep from which the soul wakes in the hereafter.

Death is the night after which the day begins.

It is death which dies, not life.

The life everlasting is hidden in the heart of death.”     —Suras, Hazrat Inayat Khan

The last week’s news cycle has included crises of breathtaking magnitude: Congress has contended with the influx of tens of thousands of children from Guatemala, Honduras, and El Salvador, while the world has watched as Israel has pounded Gaza with missiles, killing Hamas militants, but also dozens of women, children, and other bystanders. Yet the responses I’ve seen in the mass media and on social media has been overwhelmingly about the “rightness” of Israel to destroy sites that have included a mosque, a center for the disabled, and a cafe where people were watching the World Cup; also, about the “illegality” of children fleeing the extreme violence and poverty of their home countries, and how expensive it is to feed, house, and otherwise help children in crisis–and so we talk about rapid deportations, not resolution or care. Hamas isn’t relenting, so people seem to feel that the murder of innocents is somehow justified…

U.S. Secretary of State John Kerry, a former prosecutor, on Sunday built a case holding Russian-supported rebels in eastern Ukraine responsible for shooting down Malaysia Airlines Flight 17, with Russia complicit in the deaths of nearly 300 passengers and crew members.

“This is the moment of truth for Russia,” he said, leveling some of Washington’s harshest criticism of Moscow since the crisis in Ukraine began.

A piece of the crashed Malaysia Airlines Flight 17 lies in the grass near the village of Hrabove, eastern Ukraine, Sunday, July 20, 2014.

In a round of television interviews Sunday, Kerry cited a mix of U.S. and Ukrainian intelligence and social media reports that he said “obviously points a very clear finger at the separatists” for firing the missile that brought the plane down last Thursday.

“It’s pretty clear that this is a system that was transferred from Russia into the hands of separatists,” he said.

Video of an SA-11 launcher, with one of its missiles missing and leaving the likely launch site, has been authenticated, he said.

An Associated Press journalist saw a missile launcher in rebel-held territory close to the crash site just hours before the plane was brought down Thursday.

“There’s a buildup of extraordinary circumstantial evidence,” Kerry said. “We picked up the imagery of this launch. We know the trajectory. We know where it came from. We know the timing, and it was exactly at the time that this aircraft disappeared from the radar. We also know from voice identification that the separatists were bragging about shooting it down afterward.”

In one set of calls, said by Ukrainian security services to have been recorded shortly after the plane was hit, a prominent rebel commander, Igor Bezler, tells a Russian military intelligence officer that rebel forces shot down a plane.

Shortly before Kerry’s television appearances, the U.S. Embassy in Kiev, the Ukrainian capital, released a statement saying experts had authenticated the calls.

“Audio data provided to the press by the Ukrainian security service was evaluated by intelligence community analysts who confirmed these were authentic conversations between known separatist leaders, based on comparing the Ukraine-released internet audio to recordings of known separatists,” the statement said.

Ukrainian Emergency workers carry a victim’s body in a body bag as pro-Russian fighters stand in guard at the crash site of Malaysia Airlines Flight 17 near the village of Hrabove, eastern Ukraine, Sunday, July 20, 2014.

A new set of recordings apparently made Friday also appears to implicate rebels in an attempted cover-up at the crash site.

In one exchange, a man identified as the leader of the rebel Vostok Battalion Alexander Khodakovsky states that two recording devices are being held by the head of intelligence of the insurgency’s military commander. The commander is then heard to order the militiaman to ensure no outsiders, including an international observation team near the crash site at the reported time of the call, get hold of any material.

The man identified as Khodakovsky says he is pursuing inquiries about the black boxes under instructions from “our high-placed friends … in Moscow.”

In another conversation with a rebel representative at the crash site who reports finding an orange box marked as a satellite navigation box, Khodakovsky is purported to order that the object be hidden.

U.S. aviation safety experts say they are especially concerned the site will be “spoiled” if it cannot be quickly secured by investigators. Based on photographs, they say it is a very large debris field consistent with an in-flight explosion and the main evidence to be collected would be pieces of the missile.

Because the integrity of the plane and actions of the pilots are not an issue, the experts do not believe the flight recorders will yield much useful information.

U.S. and Ukrainian authorities have been at the forefront of accusations that the separatists, aided by Russia, are responsible, although other countries, including Australia and Britain have offered similar, if less definitive, assessments.

A Ukrainian investigator looks at charred debris at the crash site of Malaysia Airlines Flight 17? near the village of Hrabove, eastern Ukraine, Sunday, July 20, 2014.

British Prime Minister David Cameron said in an unusual front-page piece in the Sunday Times that there is growing evidence that separatists backed by Russia shot down the aircraft.

“If President (Vladimir) Putin does not change his approach to Ukraine, then Europe and the West must fundamentally change our approach to Russia,” Cameron wrote.

Putin and other Russian officials have blamed the government in Ukraine for creating the situation and atmosphere in which the plane was downed, but have yet to directly address the allegations that the separatists were responsible or were operating with technical assistance from Moscow.

In his interviews, Kerry accused Russia of “playing” a dual-track policy in Ukraine of saying one thing and doing another. That, he said, “is really threatening both the larger interests as well as that region and threatening Ukraine itself.”

He lamented that the level of trust between Washington and Moscow is now at a low ebb, saying it “would be ridiculous at this point in time to be trusting” of what the Kremlin says.

Kerry also said the administration was hopeful that the incident would galvanize support in Europe for increasing sanctions on Russia over its overall actions in Ukraine.

“We hope this is a wake-up call for some countries in Europe that have been reluctant to move,” Kerry said, noting that President Barack Obama had signed off on a new round of sanctions on Russia the day before the plane went down.

Kerry made his comments in appearances on five talk shows: CNN’s “State of the Union,” ”Fox News Sunday,” CBS’s “Face the Nation,” NBC’s “Meet the Press,” and ABC’s “This Week.”