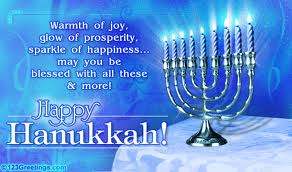 This is the festival of lights. Eight nights and eight days that bring us right to the magic and beauty of this festival. It is a holiday of warmth, candlelight, songs, games, presents and delicious foods. It is also the remembrance of the first war for religious freedom.

The Hanukkah menorah, or candle holder, has eight separate places for candles. The flames of the lights must never touch. It also contains one place is for an extra candle called the Shammash. This candle lights all of the others. It combines the earthly strength with heavenly light.

This time of year, Jews are celebrating a battle, fought against the Syrian king Antiochus IV, who was trying to force Jews to worship the Greek gods. A Jewish man and his sons won this battle. Mattathias and his sons were called the Maccabees. They were a small group of men who won the battle against an enormous army from Antiochus. They fought with farm tools, stones,and sticks.

How the Maccabbes actually won is a mystery and magic. They knew Syria much better but they were desperate to fight and save their people and they felt that Adonai was with them. This is a true story of magic and is cherished by the Jewish people.

When the Maccabees returned to Jerusalem, they were looking forward to a celebration and they found the Temple. It was  filthy with blood and debris, dirt and ashes. All of the candlesticks, Torahs and books had been stolen.

Most importantly. there was only enough oil for the seven-branched Menorah to burn for one day, when the Menorah was meant to burn continuously, as an eternal light illuminating the way to God.  Even worse, it would take eight whole days to make more oil for the lamps .  The Jews did the only thing they could think of — they used the last bit of oil.  And they prayed.  The end of the first day came, and still the lamp burned. The oil kept the lamp alight for a second day, and a third. In all, the oil lasted for eights days and nights, enough time to make more oil. For the Jews, it was a miracle, and that miracle is remembered each year on the  eight days of  Hanukkah.

Hanukkah means Feast of Dedication, and the Maccabees rededicated the Temple to what is supposed to be. It was a holy place in which to celebrate great days.So each year, we pray, light candles and remember the miracle that happened once a long time ago. Jews laugh, eat, play Dreidle, sing songs and give gifts to others.

The Menorah is lit at nightfall so the lights will shine in the darkness and even the babies will see the ritual.  The lights of the menorah are not to work by but to remind everyone of the miracle of the oil. (Source: The Family Treasury of Jewish Holidays by Malka Drucker; Little, Brown and Company”)

A Blessing Over the Candles

“You abound in blessings, Source of Light, Our G-d, Ruler of All Worlds,

Who has made us holy with Your Commandments,

And has commanded us to kindle the festival lights.” 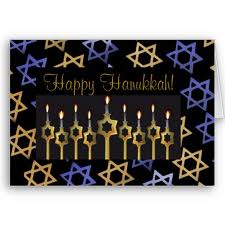