It’s hard when sheltered little girls start to grow up and get interested in boys, and boys return the interest.  You only want to really talk about positive things with your daughter, because she’s your little girl and you cannot imagine adult types of things happening to her.

Then it’s time for the first date, and she’s excited and going on and on about how good looking he is, and how sweet he was when he asked her out, and you’re thinking “Good.  Because that’s what my daughter deserves.”  Not that you’ve told her that.  She should know that.

She goes out on the date and he’s a perfect gentleman, and everything is storybook.  She’s so happy she’s giggling as she goes about the house, talking on her cell phone to her girlfriends.

After about a month of dating, he asks her to go with him to a dance.  She’s very excited and “I can have a new dress, right?  Can I have a new dress?  Can we go shopping, Mom, please?”  And of course, the answer is Yes.

You go shopping with her, and you find the perfect dress: it covers in all the right places; it’s something your own mother would have approved of for you, and she looks beautiful in it.  So, you figure, that everything is fine.

The night of the dance, he picks her up wearing a tux, has a corsage for her and promises you and your husband that he will have her home promptly at midnight.

You’re confident in him, because he’s never broken a curfew in the month that they’ve been dating.

He returns her home at 12:05, but that’s hardly worth mentioning.  She comes in and she’s happy, she says she’s happy and says she’s tired and wants to go to bed.  You wish her a good night’s sleep and off she goes.

In the morning, when she awakens, she calls her girlfriends, and tells them that he pushed her last night.  He got upset because, while he was getting punch for her, a boy from her Chemistry class came over and was talking to her about the last lab they’d had, and how crazy their teacher is.  She was laughing with the boy, because she agreed.  Her boyfriend, as he was walking back to her with the punch in hand, saw her laughing and talking with this other boy.  The lab partner excused himself and walked away when her boyfriend returned.

Her boyfriend asked: “Who was that?  What did he want?”

She replied: “Oh, nothing we were just talking about Chemistry.”

He accused: “You were laughing.  Looked like you were having a good time.”

She told him it was no big deal, and then his face darkened and he pushed her.

She didn’t fall to the floor or anything, but she felt scared.  He had never been anything but gentle with her, until last night.

Another phone call comes in to her cell phone; it’s her boyfriend, she has to talk to him.

He’s sorry.  He shouldn’t have pushed her.  He wants to make it up to her by taking her to the movies tonight.

She says, yes, and gets ready.

You notice that she’s all bubbly and happy again, and wonder what the dark cloud had been that you’d noticed earlier, while your daughter was on the phone to her friends.  Maybe it was just those teenage hormones.

She goes to the movies and they have a wonderful time.

About a week goes by, and she’s walking down the hall in school, with a bunch of her classmates — boys and girls.  One of the boys is her Chemistry lab partner.  Her boyfriend is looking for her, and he sees her having fun with all of these people, and with that one boy from the dance, laughing and talking with her.

He can’t see anything else but the just the two of them.  Laughing.  Together.  Very together.

He walks up and grabs her and drags her away from everyone else.  He’s holding her arm so tightly, as he pulls her to her locker to talk, that he leaves bruises.

He begins to rant.  He accuses her of cheating on him with her lab partner.

She’s confused; her lab partner is just a friend, she doesn’t know why he’s upset.  And he’s hurting her.  She tries to pull away.

His hand reaches back and slaps her face, and calls her a whore.

Nothing like this has ever happened to her before.  She doesn’t know what to think or what to do.

She tells him to leave her alone, and she stalks off to class with her arm hurting and her face red, still feeling the handprint.

During class, she’s distracted, thinking about what happened.  How could this have happened to her?  Why would he do this? He’s always been so gentle, so charming.

Over the next few weeks, she pulls away from her friends, gradually and steadily.  Her grades go down a little bit, but not enough for her teachers to worry, to call her parents.

She’s running late, she doesn’t want to talk, and she hurries out the door before you can ask anything more.

What you don’t know is, the night before, on their last date, her loving boyfriend tried to choke her.  The turtleneck is covering the bruises on her neck.  She knows you would never allow her go see him again if you knew.

But he loves her.  He told her he did; well, after he choked her.

And she loves him.  Well, usually.

She wants to ask one of her old girlfriends if this had ever happened to them.  But it was embarrassing.  What if it hadn’t happened to them?  What if they thought it was her fault, if they knew she did something wrong?

She can’t talk to you.  You’ve never talked about anything like this.  You’d never understand.

She decides to just keep the information to herself.

Six more months go by.  He asks her to go steady. She eagerly says yes, but there’s a little voice inside that’s saying, “Run.  Run.”

He tells her that now, she will be His.  And no one can every interfere with them.  He’ll take care of her, she won’t need anyone else, because she has him.

Several more months pass.  They have a horrific argument and your little girl comes home.

Her face looks like pulp.  He punched her this time, and she cannot hide this from you.

He had the right to do it, he said, because she belongs to him.  They were going steady, after all.

You see her.  “What happened?” you ask, and for the first time in months, she tells the truth.

But she still thinks it’s her fault.  He always says she’s stupid and ungrateful and a burden to him, and she’s lucky he loves her at all.

But he does love her.  He says.  Between the punches.

And your heart breaks.

This young girl has found herself in a spot many young girls find themselves in.  They think that abuse is only broken bones or going to the hospital.  That’s never happened to her.  He only pushes.  Only shoves.  Only yells. He’s only REALLY hit her once.

What these girls don’t understand is that a slap, a push, a shove, twisting her arm, punching her face; belittling and calling her names; separating her from her friends — isolating, it’s called — it’s all abuse, battering.

They don’t understand that they are in danger, and this one person is the person they should be terrified of, and should get away from.

Hopefully, after talking to a counselor with or without her parents, and dating some other young men who treat her with the respect to which all young women are entitled, she will learn that she did not deserve the violence her now ex-boyfriend introduced to her life.

Hopefully, in the future, the men that she picks will not be abusers, and she will not spend years of her life living in violence in fear.

Because she never could.

Because NO ONE ever deserves to abused. 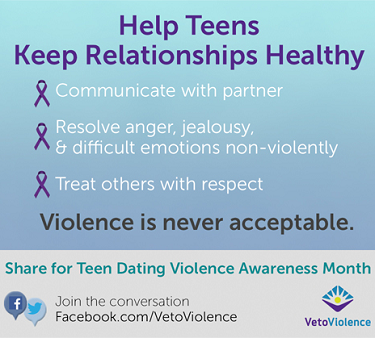