It is the fifteenth anniversary of the largest attack on America since Pearl Harbor. My sister was in the hospital having surgery and I was in the waiting room. I asked the nurse to turn the TV on. It was maybe 30 seconds before the first plane hit.  That is all about me. From the depths of my heart I honor those killed at the 3 crash sites. Their bravery is legendary.

To all of the survivors, and including the first responders, I am sorry for your losses. Only the bravest of people were left here to continue the journey of life. I pray that each day brings you a little more peace and contentment and that the grief you hold lightens and pride replaces it. Thank you from the bottom of my heart to all of the first responders. May blessings be heaped upon the heads of everyone of you.  To the victims  WE HAVE NOT FORGOTTEN YOU.

Today is the twenty first anniversary of my late husband’s death. I am dedicating this blog of music tonight to him. Thank you for the memories. I have not forgotten any of them. The flowers still bloom.

Thank you for listening and sharing this beautiful music with me. Blessings, peace and harmony, Namaste

“The right of citizens of the United States to vote shall not be denied or abridged by the United States or by any State on account of sex. Congress shall have power to enforce this article by appropriate legislation.”

When American women were first trying to get the vote, men believed it was inappropriate for women to vote and provided a variety of “reasons”.  In 1915, writer Alice Duer Miller countered the ridiculous arguments of anti-suffrage men with humor:

Why We Don’t Want Men to Vote

The true ridiculousness of the fight is clear in the view of hindsight — during World War I, when able-bodied men were fighting in Europe, it was women who took their place in factories and kept this country moving, providing support and arms to our fighting men.  Yet still, these brave, hard-working women could not vote.  President Woodrow Wilson recognized the disparity, and in a speech on September 18, 1918, he said, 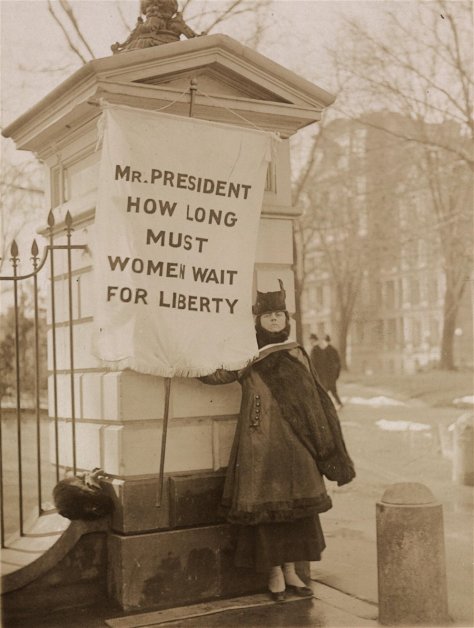 In January 1917 the CU and NWP began to picket the White House. The government’s initial tolerance gave way after the United States entered World War I. Beginning in June 1917, suffrage protesters were arrested, imprisoned, and often force-fed when they went on hunger strikes to protest being denied political prisoner status.

The National Woman’s Party militant tactics and steadfast lobbying, coupled with public support for imprisoned suffragists, forced President Woodrow Wilson to endorse a federal woman suffrage amendment in 1918. Congress passed the measure in 1919, and the NWP began campaigning for state ratification. Shortly after Tennessee became the 36th state to ratify women’s suffrage, the 19th Amendment was signed into law on August 26, 1920.”

I am bringing this up today not only to celebrate the 94th Anniversary of this wonderful Amendment, but also to make a point to every woman out there in the United States:

A mid-term election is coming up in November.  I don’t know who you support in the election, or what party you are involved with, or if you have ever voted before, and it really doesn’t matter.  What DOES matter is this:

A lot of women worked very hard for a long time to give you the right to vote this November.

You owe it to them, as well as to you, your generation, and the next generation to come, to exercise that right.  Vote for your granddaughters and your great-granddaughters, and they will one day have what we have yet to win:  True Equality.