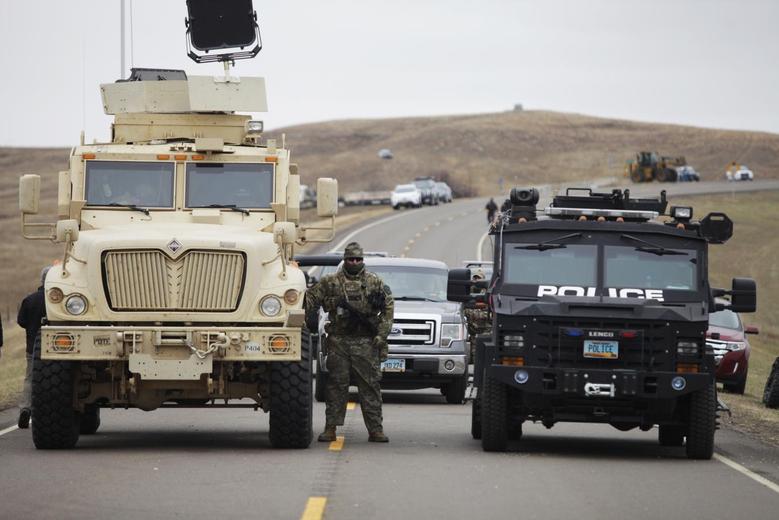 President Barack Obama said the U.S. government is examining ways to reroute an oil pipeline in North Dakota as it addresses concerns raised by Native American tribes protesting against its construction.

“My view is that there is a way for us to accommodate sacred lands of Native Americans. And I think that right now the Army Corps is examining whether there are ways to reroute this pipeline,” Obama said in the video interview.

On Wednesday, protesters on the banks of the Cantapeta Creek confronted law enforcement, as they attempted to build a wooden pedestrian bridge across the creek to gain access to the Cannon Ball Ranch, private land owned by ETP, according to a statement from Morton County officials.

The U.S. Justice and Interior Departments along with the U.S. Army Corps of Engineers halted construction on part of the pipeline in September due to protests by Native American tribes who contend the pipeline would disturb sacred land and pollute waterways supplying nearby homes. The affected area includes land under Lake Oahe, a large and culturally important reservoir on the Missouri River where the line was supposed to cross.

The 1,172-mile (1,885-km) pipeline, being built by a group of companies led by Energy Transfer Partners, would offer the fastest and most direct route to bring Bakken shale oil from North Dakota to U.S. Gulf Coast refineries.

North Dakota officials are girding for a long fight. The state’s emergency commission on Tuesday approved another $4 million loan to support law enforcement during the protests.

David Archambault II, chairman of the Standing Rock Sioux, in a Wednesday statement lauded Obama’s comments and called on the administration and the Army Corp of Engineers to issue a stop-work order on the pipeline on federal land. He also called for a full environmental impact study.

“The nation and the world are watching,” he said. “The injustices done to Native people in North Dakota and throughout the country must be addressed. We believe President Obama and his Administration will do the right thing.”

LETTING THE SITUATION PLAY OUT

Obama said government agencies will let the situation “play out for several more weeks and determine whether or not this can be resolved in a way that I think is properly attentive to the traditions of First Americans.”

Morton County Commission Chairman Cody Schulz, in response to Obama’s statement regarding the pipeline, said that letting the situation play out “affords the opportunity to the out-of-state militant faction of this protest to keep escalating their violent activities.”

The Now This video, however, suggests that Obama was talking about the review process, not the protests. The president later in the interview says that he wants to make sure that both protesters and law enforcement are “refraining from situations that might result in people being hurt.”

The fight against the pipeline has drawn international attention and growing celebrity support amid confrontations between riot police and protesters. More than 140 people were arrested when a protest was broken up by law enforcement nearly a week ago.

Some have said an alternative pipeline route could be a way to get over the impasse.

In North Dakota, gubernatorial candidate Marvin Nelson, a Democratic state representative, said in an interview with Reuters last week that moving the route 10 miles north could make a difference.

“It would take some time to do that, but it seems to me to be a much safer route and it wouldn’t need to cross culturally sensitive land,” he said.

“There’s no reroute that doesn’t involve the same risks to water and climate,” said Sara Shor, a campaign manager for 350.org.

“President Obama breaking the silence on Dakota Access is a testament to the powerful resistance of Indigenous leaders, but he shouldn’t sit back while people are facing violent repression from militarized law enforcement on the ground.”