The Return of the Modern Philosopher 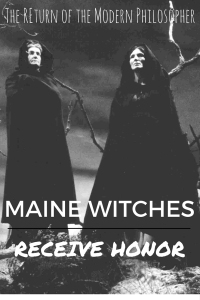 While the rest of the East Coast continued to dig out from underneath Winter Storm Jonas, Mainers enjoyed a sunny day during which the mercury crept into the mid-forties, Modern Philosophers!

How did Maine, the state that is so often the focus of Snow Miser’s wrath, manage to avoid even a flurry during the Great Blizzard of 2016?

The answer was clear today at Bangor City Hall, where Maine’s most powerful Witches were honored for their Protection Against Jonas Spell.

Waltzing Matilda, Volcanica Ivy, and Ti-Diana were presented the Stephen King Medal of Honor, the highest award that can be bestowed upon a Maine citizen who is not a member of the Armed Forces.

The ladies, who are my good friends, the leaders of Maine’s largest coven, and co-owners of Three Toads & A Wicked Lady, Maine’s most popular Witch bar, accepted their medals from Mayor Ben Sprague as a…

One thought on “Maine Witches Honored For Protection Against Jonas Spell”