Women can not be equal without legally being equal.

Our world is living within a horrible hangover. In most religious communities there is something leftover from the past. It is the subordination and subjugation of women. We are striving to live in a world very different from that of our ancestors. Now this has been a cultural earthquake. Many people from different cultures are grasping to hold on, to hold on to their version of the past.  They want the past to remain immovable.  There are people who are even coerced into sexism.

The Vatican has tried to do this with Catholic nuns. American Catholic bishops consult with women to try to make them not use contraceptions. Without adequate contraceptives the size of families becomes too large to give each child the education they need to be productive members of our world.

In Israel, some state-supported Orthodox people have used physical violence. Groups of Jewish women have been praying as a group, chanting and wearing prayer shawls at the Western Wall. Jewish traditions see the Wall as the refuge of Shechinah, the Feminine Indwelling Immanent aspect of God, after the destruction of the nearby Temple.

This war on women

We are moving into a new world, given us by God. Women and men are learning the difficult practice of dancing in God’s earthquake. Men and women need to resist the subjugation of women. Women who have tried to pray at the Western Wall are being mishandled and forced to leave the Wall because it is holy and women have no right to pray there.

In other countries, women are still participating in genital mutilation. Female midwives with the cooperation of mothers, will perform a clitorectomy and cut out the clitoris. This makes sure the child will never enjoy sex when she grows up. In some countries, the vagina is sown up to prevent her from having sex with a different man while her husband is away on business. A girl who has not had this done will not be able to marry. No one will want her. These procedures are done without anesthesia or pain medication.  These procedures make child birth more dangerous. I don’t know about everyone else but this makes me want to throw up.

Women are equal and deserve to receive equal pay for equal work. They deserve equal recognition for their work. They also deserve promotions when their work equals that of a male co-worker. 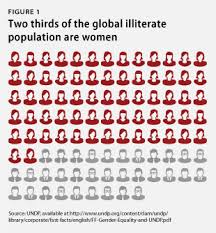 Two thirds of females in the world are illiterate.

The majority of women in the world are considered so insignificant that it is felt they are not worth educating. They stay at home while brothers go off to schools to learn to do math and to read. This is why Oprah’s schools for girls are so important. Knowing someone believes in them helps them to believe in themselves. They know, when they are grown up they will be able to get a job in a city and save money to help their families.

God did not make a mistake when he created Eve, if you accept the story. Eve was not a secondary creation.  I think that if there was a serpent and he talked Eve into eating the forbidden fruit, then she made a choice. Adam also made a choice. When she offered the apple to Adam, he could have said no. He was responsible for his choice not to say no. Eve was not at fault. Women don’t have to carry that guilt. There is also a legend in Judiasm that Lillith was created to be Adam’s partner and she lived with him in equality. Adam complained to God and he got Eve instead.

Whatever you believe, women are equal. All human beings are equal. Where inequality remains, we will squelch it and make sure everyone is equal. Teach your daughters to be confident in themselves and your sons to respect women.