You have a source inside you, a cool spring that sometimes stops flowing, frozen

or clogged with silt. A voice says, ” Consider the situation more deeply, my friend.”

Such advice is not idle. It is immediate  companionship with a soul artist like David,

who works iron until it melts and he can shape it. Spirit is the art of making what’s

blocked start moving again. When your body dies, give it to the death angel,

Israfil. If your heart feels numb and metallic, walk out into the sun, or whatever

the mystery is that makes your inner spring well up. There was once a sage who felt

this flow moving inside him. As he walked the garden that

was being restored with

spring water, he gave names to aspects of the vital dance he was doing: the animal’s

Sanai, who could put those two in one gesture.

I hear nothing in my ear

but your voice. Heart has

plundered mind of all its

transparent calligraphy, so on the empty page my soul

can read and recollect. 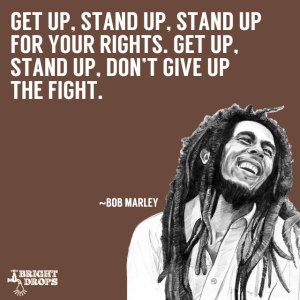 In the sixties, there was a perfect storm of hatred and violence and passionate pacifism. Folk singers like Peter, Paul and Mary, Pete Seger and Joan Baez sang the songs that started the fire that crossed America to get the Vietnam War ended. Hearts were set afire with music, poetry, sit-ins and marches. We watched the boys we knew going off to the war. There was a draft and I can remember sitting at the dinner table and listening for the numbers to be selected. You knew the numbers of your family and friends. The silence that would envelope a family when a son’s number was called was so opaque you could cut it with a knife. In addition to this being held like a human sacrifice by a Pagan world, some of these men fled and went to Canada. Very few returned, even when all was forgiven.

Thanks to President John Kennedy and Rev. Martin Luther King Jr. whites and blacks moved together to bring his dream of equality to reality. Since the Civil War, the South had promoted and enforced strict segregation. This included separate restrooms, sitting in different parts of busses and not allowing interracial marriage. The very brave black youth who shared Rev. King’s dream began to protest and white Northern kids went South to help them. People lost their lives. The KKK lynched many young black men. The cowards who hid under white sheets were big shots when no one knew who they were. Many deaths were accomplished by the hand of the KKK.

In the seventies, my adoptive family lived in a small back water town in Indiana. They were the only Jewish family and there was one Black family. One night both families awoke to crosses burning on their front yards. The Klan had left its business card.

Women also participated in all of the changes going on in America. Rosa Parks got on a bus and instead of taking a seat in the back where black people were supposed to ride, she sat in the front of the bus. She was dragged off the bus and arrested but she is a heroine of the Civil Rights Movement. Feminists were out front and speaking up against the war and loudly demanding our civil rights. Women, make $.77 for every $1.00 a man made. We didn’t want to lose jobs if we had a child. Maternity leave was a subject that many businesses used as a reason not to hire women.

Women were being beaten by husbands and boyfriends, according to the FBI at a rate of one woman every eleven seconds. I worked hard with other women in my home town to begin a Domestic Violence shelter for women. We wanted to give them a safe place to go. We were a group of Jewish, Protestant and Catholic women who bought an old rotted dingy house with the help of the Sisters of Mercy. A penny was buried in the tree lawn and the Sisters prayed for the money to come to help the women in our community. Today, this shelter still exists and has over a yearly budget of over a half million dollars. But I remember the early days when we literally risked our lives for these woman and I would do it again.

Voting rights, economic rights and education are still not equal or just fifty years after the Civil Rights Act was passed. I thought that America had begun to change and we would just continue to move in the direction of fairness and justice. I was wrong. Very wrong. I didn’t realize until our President Obama was elected that the closet held more than homosexual people. It held people who still feel that human beings are not equal because of the color of their skin. This is such a travesty and must be corrected. We are one people who live with hearts beating as one despite color, education, who they love. We need to care as much for the babies who are born and need to be taken care of as we do for a woman’s right to decide what happens with her body. I saw a bumper sticker today on a car that said, “Save the whales, kill the children.”

The rich feel that their money gives them more rights than anyone else and it is getting worse every year. Is this a new situation? Not at all. It goes back very far in our history. During the Civil War, President Lincoln instituted a draft to have enough men to save the Union and free the slaves. The rich families were allowed to pay for their beloved sons not to have to go to war. So most soldiers were poor or middle class. They weren’t worth as much because their families had less money. Please don’t think that the rich looking down at the other 98% of our country. People need to select sides not parties. This mid-term election coming up is going to make it necessary for us to stand up and speak out. I encourage everyone do so and fight for justice in your particular country. As is often repeated,         ” If you aren’t part of the solution, you are part of the problem.” 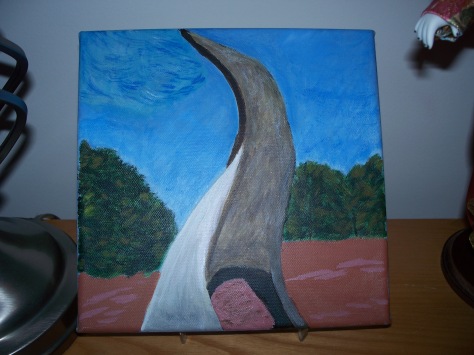 Washington DC is a remarkable city. There are the politicians and Congress and the White House. I have gone there many times to see art museums. I love borrowed exhibits. I have also been in the mall more times than I can remember for protests and picketing for women’s and children’t rights.

Yesterday, Congress did pass the Violence Against Women Act. This is a wonderful victory for women. But don’t get too excited because there is still a war going on against women.And this piece of legislation must be ratified by Congress every five years.

We still must work to receive legal equality. We, the women of America, are the only citizens who do not have legal equality. This needs to be passed this year. There is still much discrimination against women and minorities.

Every Republican voted against equal pay for equal work

There is a lack of respect for women in America

I suggest that everyone looks for the voting record of your Congress people. Look at who is voting against women and children. If you have one who has voted against legislation you believe in, it is time to vote againt the Congress person in the next election.

We can change women’s lives with our voices and our actions. We can use peaceful ways to debate and state the importance of respect for women, reproductive health concerns, education, equal pay and legal equality. Don’t leave it for someone else to stand up and tell the world our truth. We are sisters and need to stand up with and for the women of America. 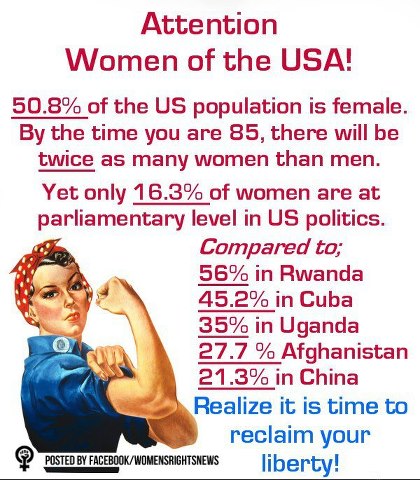