Members of the House Freedom Caucus, which is composed of all men, went to the White House to talk with the president about what changes they’d like to see to the GOP health care bill. One of the major adjustments would be no longer requiring insurance companies to offer maternity care in all health plans.

Pence proudly tweeted a photo of the meeting, which didn’t feature a single woman (although White House counselor Kellyanne Conway was reportedly there): 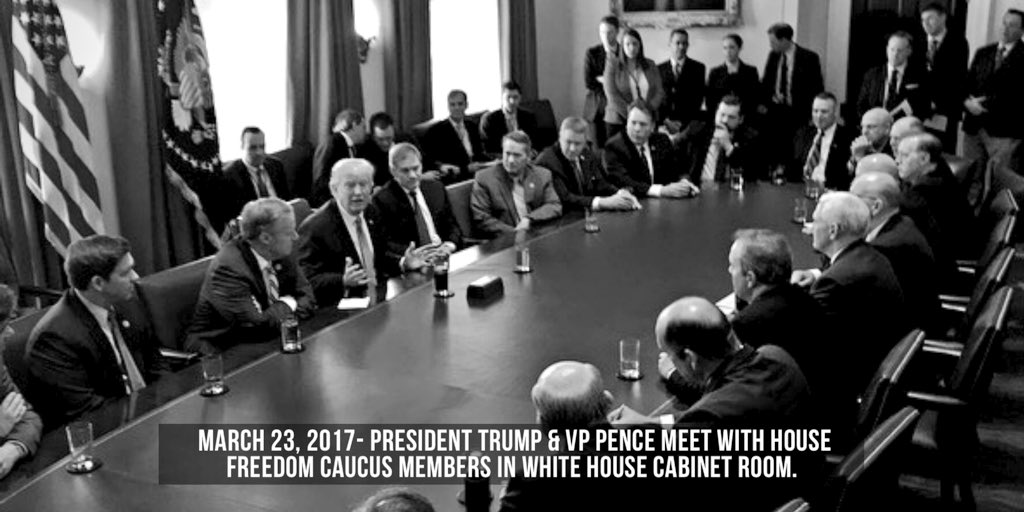 The Affordable Care Act created a list of 10 essential health benefits that all health insurance plans must cover. Pregnancy, newborn and maternity care are on that list.

Before the Affordable Care Act became law in 2010, the insurance market was a bleak place for women. They often had to pay more than men for the same coverage. Only 12 percent of individual market plans covered maternity care. And it was completely legal for insurance companies to refuse coverage to women who were pregnant or might become pregnant in the future.

Experts worry that if insurance companies are given the option of offering expensive services like maternity care, it will become a race to the bottom where that coverage, once again, becomes scarce.

But there were few, if any, women at the White House this morning to voice these concerns to the men around the table.

“Stripping guaranteed maternity care is a pregnancy tax, pure and simple,” she said.

In one of his first acts as president in late January, Trump signed an executive order regarding funding for abortion and women’s reproductive rights worldwide surrounded entirely by men.

Since the beginning of time, men have tried to tell women how to live their lives. Even if they lived in caves.  The male of the species seem to feel that women need supervision on how to live their lives. What has that included? It has included where to go, who to see, when to go out of the house, whether to go on to school, what to wear and now if we should have children and when we should have them. The new issue in 2017 is why should men have to pay for pregnancy? They might have a case if they weren’t also involved in contraception and fertility. The GOP does not want to pay for contraception, pre-natal care, or labor and delivery, but they will of course cover Viagra. Who, exactly, are they using the Viagra with?   Contraception, pre-natal care, labor and delivery do not affect just women. The by-product of the male/female relationships are human children. Human lives. Lives that need love and guidance from both parents. If the males of the race do not want to have responsibility paying for contraception, pre-natal care or even maternity leave then why are we listening to them as they go on telling us what to do with our bodies, when and with whom? It is morally wrong to let men tell us how to live our lives and use our bodies. GOP or Democrats, it doesn’t matter.

Women are equal and free human beings. We must be be in control of our own lives, our bodies and not boyfriends, husbands or even Congress.

One thought on “Once Again, Men Decide the Fate of Healthcare for Women”