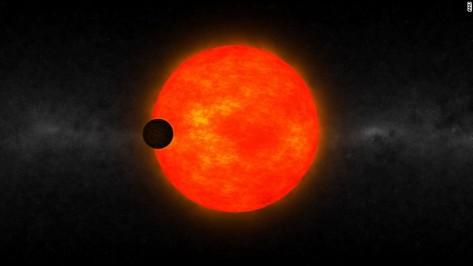 (CNN)A huge “puffed up” planet “too big for its star” some 500 light years from Earth has been discovered by Australian researchers — with the help of a backyard astronomer.

The planet’s size in relation to the star it orbits challenges theories about how planets are formed, researchers from the Australian National University said.

“We have found a small star with a giant planet the size of Jupiter orbiting very closely,” said George Zhou from the Research School of Astrophysics and Astronomy.

“It must have formed further out and migrated in, but our theories can’t explain how this happened.”

Astronomers believe that planets are created from a “disc” of dust and gas around stars, Zhou told CNN.

“We think that planets are the leftovers of star formations,” he said.

But he said the star — HATS-6 –was almost too small for it to have any leftovers and the discovery of a planet — named HATS-6b — raised questions about how large a disk could form around a star relative to its size.

“HATS-6 is one of the lowest mass stars known to host a close-in gas giant planet,” the team of researchers said in a study published in “The Astronomical Journal.”

Astronomers first got an indication of the planet’s existence when they noticed that light from HATS-6 dimmed, — suggesting that a planet was passing between the star and Earth.

To confirm the transit signal, they went to of the world’s biggest telescopes — Chile’s Magellan Telescope — and a backyard astronomer in the northern city of Perth, T.G Tan.

Zhou said that the amateur astronomer had been really helpful. “He was able to catch the transit of the planet from Perth, after it had set over our horizon,” Zhou said.

He told CNN that the university — part of the HATSouth Exoplanet Survey — used telescopes to monitor hundreds of thousands of stars. With about a thousand planetary candidates they needed to enlist amateurs to monitor their transits.

“Amateurs have been getting ever more sophisticated,” Zhou said, with Tan a “near professional.”

‘He was able to help us actually confirm that this transit signal was not a blip. That was a massive contribution from him.”

“We have a series of small telescopes spread around the world — in Namibia, New South Wales and Chile — we’re able to gather continuous observations of objects in the night sky. That’s how we’re discovering these planets.”

Zhou said the planet’s atmosphere would make an interesting study.

“The planet has a similar mass to Saturn, but its radius is similar to Jupiter, so it’s quite a puffed up planet. Because its host star is so cool it’s not heating the planet up so much, it’s very different from the planets we have observed so far,” he said.

“By having an atmosphere that’s puffed up it actually allows us to look through the atmosphere,” Zhou told CNN.

When starlight passed through the top atmosphere, astronomers would be able to look for absorption signals that revealed details of its composition, he said.

“Every element has its barcode — or spectrum. We want to break the light of HATS-6b into its rainbow of color, within that, there’s a barcode for absorption.”

4 thoughts on “Surprises in the Universe”