The latest front in the Republican Party’s vicious onslaught against the right to vote was just unanimously overturned by the Supreme Court- conservative leaning justices and all.

The Republican Party of Texas brought a legal challenge against the state’s practice of drawing the voting districts based off of equal numbers of total population, stating instead that the districts should have equal numbers of registered voters.

This practice, if adopted, and as discussed in the video below, discriminates against those minority populations that, for reasons including a lack of literacy in the English language and lack of integration into the complexities of American government paperwork trails, would not be registered to vote when the districts were being drawn.

This lack of respect for minority voting populations is embedded in establishment Republican politics in the United States. These minority voters, from immigrants to African Americans, historically do not vote for Republicans, spelling trouble for the Party whose main goal seems to be the longevity of a system that serves the bosses in the most efficient way possible.

According to the Pew Research Center, among African Americans, there is an almost 70 point advantage for the Democratic Party. Among Hispanics, this advantage is 30 points.

Even apart from the Democratic Party, there are, as was mentioned, many, many people who are not registered to vote at all. A measure like the one proposed by the Texas Republicans would eternally block them from exercising their voice in the political process to the full extent of their rights, since they would be unevenly distributed among districts- and tend to lean Democratic when they do vote. These people not registered to vote obviously include recent immigrants and extremely low income people.

The GOP’s attempts to block voters who are not favorable to their agenda are not limited to Texas. Failed Republican presidential candidate and Republican governor Scott Walker’s Wisconsin will have its first election with a new voter ID requirement law this Tuesday, a law that was called “un-American” by Democratic presidential candidate Bernie Sanders. The law has been estimated to have the potential to affect 300,000 voters.

You can watch breaking coverage of the case below, via MSNBC on Twitter.

This issue has been addressed before. The Civil Rights Era addressed it and now people think that they can keep minority people from voting? Not so. SCOTUS has ruled against such bigoted laws. What I will say is this; vote, vote in your primary and in the November election. Don’t feel that your vote won’t count because it does. Voting is a right that as Americans we have been given. Because voting is a right it is also a responsibility. One every citizen shares. Use your votes and don’t sit back and give up your say in your government. Each American has a vote. Use it or never complain about what the government is doing. 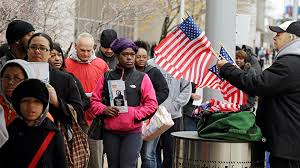 Voting is your right. Don’t let the government take it away. Fight to vote. 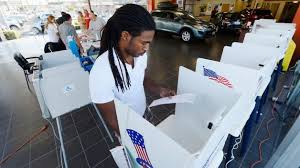 The voting act guarantees everyone a vote.