These statistics are only the most publicized, easily quantifiable manifestations of the intersection between domestic violence and firearms. Guns are used to terrorize far more often than they are used to kill. A survey by the National Domestic Violence Hotline found 16 percent of respondents’ abusers owned firearms. Of respondents whose abusers owned guns, 67 percent percent believed their abusers were capable of killing them.

These statistics are staggering, yet they are more than numbers—they are people. My colleague, Rob Valente at the Hotline, quotes two survey respondents. One respondent disclosed that her husband owns over 100 guns. She never knows where the guns are, or how many guns he is carrying at any given time. Another respondent tells of repeatedly waking up at night to the sound of her abuser releasing the safety on the gun he is holding to her head.

Although the Lautenberg Amendment saved countless lives, it is no longer adequate; society has changed and the law must be updated to reflect these changes. Under existing law, the definition of domestic violence only includes abuse perpetrated by a current or former spouse, cohabitant or biological co-parent. Dating abuse does not trigger the firearm prohibition, despite the fact that current or former dating partners commit approximately half of all domestic violence homicides. Likewise, people convicted of misdemeanor stalking are not prohibited from owning firearms, although stalking is a key indicator of lethality; a 10-city study found that 76 percent of women killed by intimate partners were stalked before being murdered, and 85 percent of women who survive murder attempts were stalked.

Democratic Sen. Amy Klobuchar’s Protecting Domestic Violence and Stalking Victims Act of 2015and its companion bill from Reps. Debbie Dingell (D-Minn.) and Robert Dold (D-Ill.), Zero Tolerance for Domestic Abusers Act, expand the existing domestic violence prohibitor to include dating abuse and stalking. These narrowly focused domestic violence bills could save countless lives without infringing on the Second Amendment rights of law-abiding Americans. We at the National Coalition Against Domestic Violence, our colleagues at other organizations, advocates across the country, victims and survivors call on Congress to demonstrate their commitment to ending domestic violence by passing these two bills. The time for talk is over—it is time to take a stand! 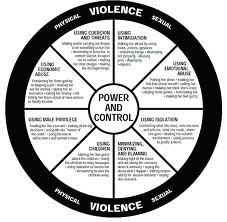 If a man or a woman stays in a violent home, their life will continually rotate around the cycle of violence. Help is available. Look at this cycle and see if it is familiar to you.

8 thoughts on “Guns and Domestic Violence”