Children Learn What They Live

One in every four women will experience violence in her lifetime 85% of DV victims are women. An estimated 1.3 million women will be abused each year. Abuse is a generational thing that children learn because they see it happen.

Almost one third of female homicide victims that are reported in police reports are killed trying to get out of a battering relationship with an intimate partner. In 70 % to 80% of homicide victims were battered by their domestic partner prior to their demise. Less than one fifth of victims who report injuries seek,medical help.

Witnessing abuse between intimate partners is the strongest risk factor to children growing up to be a victim or a batterer. 30% to 60% of perpetrators also abuse the children in the home. Forced sexual assault is also abuse. It is illegal to rape your wife and a person could go to prison. Marriage doesn’t mean you own a person. They still own their own body and you may or perhaps not be able to use it.

There is no specific time you can expect abuse to start.

The cost of intimate partner violence exceeds 5.8 billion dollars a year. Victims of intimate partner abuse lost almost 8 million days of work because of the violence perpetuated against them. This loss is equivalent to 32,000 full-time jobs. Another 4.1 billion dollars is for medical care of the victim. There are 16,800 homicides each year. More victims are murdered trying to leave an abusive relationship that at any other time during it. This is why women often go back over and over again. 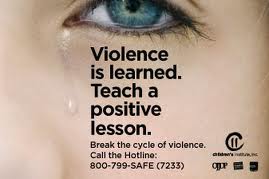 Don’t teach your children to be victims or batterers.

Domestic violence  is one of the most underreported crimes. Now, cities like Norristown are penalizing the victim for calling the police, (please see previous blog), Who wants to be homeless or have their children being homeless? Only approximately one fourth of physical assaults and sexual assaults are reported. States differ on the type of relationship that qualifies under domestic violence laws.

For more information or to get help, call:

8 thoughts on “You Know Someone Who Has Been Abused”