Susan B. Anthony was a Suffragist and worked hard for the rights of women including the right to vote. I wonder what she would think about the current war on women being waged in the twenty-first century. Including the right to be legally equal. The constitution gives men equality. White men, of course. Then the abolitionists and the Abraham Lincoln made blacks and whites equal. Women however, have never been accorded this inalienable right. I recently had a conversation and equality came up. Every man belly-laughed at the thought that women needed to be legally equal. It gave me the experience of “going through the looking glass.” It was the juxtaposition of reality and illusion. This is something that has historically been used to justify oppression.

Susan B. Anthony and Elizabeth Cady Statton were the mothers of the cause to fight for the right to vote. Elizabeth was a wife and mother of eleven. Lucy Stone was another of the suffragists who devoted their lives for us to be able to vote. Alice Paul received a master’s degree. Her dissertation focused on the legal inequality of women. That was in 1906 and it is more than 100 years later. One hundred years, where we are citizens but not equal women. Another movement was waging an antislavery war and well as the fight to vote. Many people took part in the abolitionist movement as well as the Suffragist movement.

In the 1970’s we worked once again for women’s issues. The right to control our own bodies, the right to be free to live without violence. Equal pay for equal work. It is a long list. At present, Congress is trying to take many rights away from us. President Ohoma has recently signed a bill extending the equal pay law. Unnecessary? Well, The government stats say a woman earns $.77  for every $1.00 a man makes for the same job.

Domestic Violence is growing and many young women I speak to, think they deserve to be abused. Some don’t understand that when someone  hits, punches, shoves, kicks, slaps, demeans, controls a woman, it is wrong. It is illegal. Every woman has the right to live without violence. Now there are those in Congress who wish to take away the laws we fought for in the 1970’s. That can’t happen. Domestic Violence is found in every demographic in our society. You know an abused woman, even if you don’t realize it. She could be the professor’s wife, the mailman’s girlfriend, your neighbor, the Rabbi’s wife, the Pastor’s sister, your daughter, your friend, your supervisor. 5% of abuse happens when a woman abuses a man. It is not as frequent but it does still happen.  I find that the more I read the words of the feminists and the suffragists who walked before me, the more my eyes are awakened to the importance of all of these issues.

Even though, women around the world are suffering from inequality more than most here in the states; it does not mean that we should shut up and be grateful for what we have. Genital mutilation, acid throwing, human trafficking, sex slavery, forced marriage at 11 or 12 are all issues that still need to be fought .  We have daughters and granddaughters who need us to make life safe for them. To   teach them that they have worth, they are important and equal human beings. 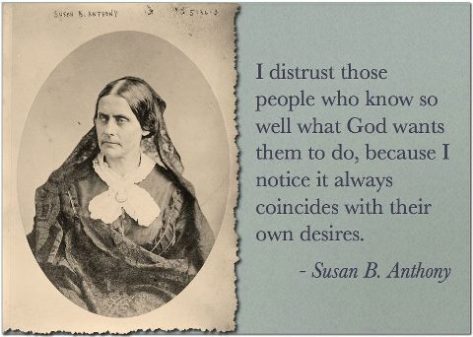 15 thoughts on “Wisdom of Women”