Domestic Violence is found everywhere, at every social-economic level.  It matters not the color of the couple. There are women that you know how are victims of Domestic Violence. It could be your minister’s wife, the grad student’s girlfriend, the cop’s wife, the Senator’s wife. It can be your next door neighbor, you know the one, whose husband is so nice; he is charming and helpful. And he is an abuser. Your mailman may be beating his girlfriend. Your child’s favorite teacher could be a regular victim of vicious beatings. Beatings are often administered where clothes will cover the bruises.

Every nine seconds, a woman is abused. Abuse can be physical, emotional or mental; any or all of these are abuse. If you are living with slapping, punching, broken bones, head injuries, pushing, name calling, and threats to kill you, you are living with abuse. No woman “asks” to be beaten. Abusing men like to tell their victim that it is her own fault…but it isn’t.  Ever, no matter what the woman has “done” or been accused of doing, it is never her fault. Every abuser chooses to beat a woman and is responsible for his actions. I will say here that if a woman beats a man it is also a crime she is guilty of committing. 5% of men are abused but every nine seconds a woman is beaten.

Yes, women suffer. When I worked in Domestic Violence, one of my jobs was as a counselor. Stories told to me  included: the woman was beaten because the kids made too much noise; she was beaten because she couldn’t get the stain out of his shirt, or because dinner was late getting put on the table. Also, he doesn’t like dinner and many women have had his plate full of food smeared into her face. Yes, this is abuse.

When children watch this kind of behavior, they learn to be abusers and victims. Often sons carry a lot of guilt and anger for their mother because she doesn’t stop the violence. They very often go ahead and begin punching, pinching,  calling women names in high school. It frequently continues their entire lives.

I know of a mayor in a large city who has beaten three wives. He was an okay mayor but he was a demon to his wives. How do I know? I know because his wives came to one of the shelters I have worked with. We keep files on abusers. He was in it three times. Did he ever accept responsibility for his actions?  No, not at all. The wives were convinced not to press charges, so he was never forced to accept any consequences.

I did hear today, a prosecutor  stated that the law is now looking at abuse not just a women’s issue but as a crime against the community. I think this is a good thing. Why does abuse continue to be such a terrible and insidious part of life for women? Because the usual sentence is $1000 fine and 18 months in jail.

I am a spiritual person, but if you have been beaten, that is not God’s Will. It is a crime. There are places you can go for help. All communities have a Domestic Violence (DV) hotline. Shelters exist in most cities. Every taxi driver knows a DV shelter. Go, get help, start over. You do not deserve to live in violence. He always promises it will never happen again. It will. We had a program for counseling for the abusers. We found that a support group for the men worked best because they called each other on their lies and rationalizations.

If you are told that you need to forgive your abuser, to pray for him; if you are told you can’t leave because God requires you to stay in the sacred bond of marriage, you need to realize this is a lie, perpetuated by the men in power who want to keep women subservient. As a wife, you are not the property of your abuser.  He does not own you and the Divine does not want you to suffer. Leave, get into a shelter, believe in yourself, you can take care of yourself and your children.  If you think leaving will hurt your children, you will find that they will respect you much more if you protect yourself and them, and they may not end up as the abuser or the victim.

Anyone who says to stay in a relationship is possibly a batterer himself, or doesn’t really understand the issue or really doesn’t care about your well-being.

If your abuser threatens you with a weapon, even if he doesn’t use it, you need to realize that the chances are extraordinarily high that he will at some point and he will tell you it is your own fault that you are going to die.

I had a woman who was held at gunpoint for a solid 12 hours before the abuser fell asleep and she ran like the wolves of hell were after her. If he had awakened, he would have killed her. She made it to the shelter I worked at and we talked, cried, and held each other as she finally was able to tell her truth. I took pictures of her injuries for court and tucked her and her two children into a warm safe bed. Her face was streaked with tears, but she fell asleep immediately. I cried and prayed for her until the sun began to rise. Then I began to form her plan to go to court, to take care of her children and to take care of herself. We put her into temporary housing and helped her to find herself once again.  She got out.  You can, too

If you want more information go to NCADV.org. It is the National Coalition Against Domestic Violence.  October is Domestic Violence Awareness Month, and as I have done in the past, I will be writing about the issue all month.

Don’t ever let someone hit you. It is a crime. I will take comments and listen if anyone is in a abusive relationship. I will give you the best answer I can based on my education and experience. It would all be confidential. Praying is not enough. Praying is good, but you need human intervention and action, in addition.

Let  me help. Let others help.  Remember that you deserve help.

You Can’t Beat a Woman. 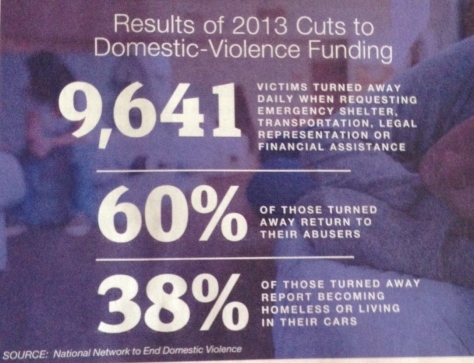