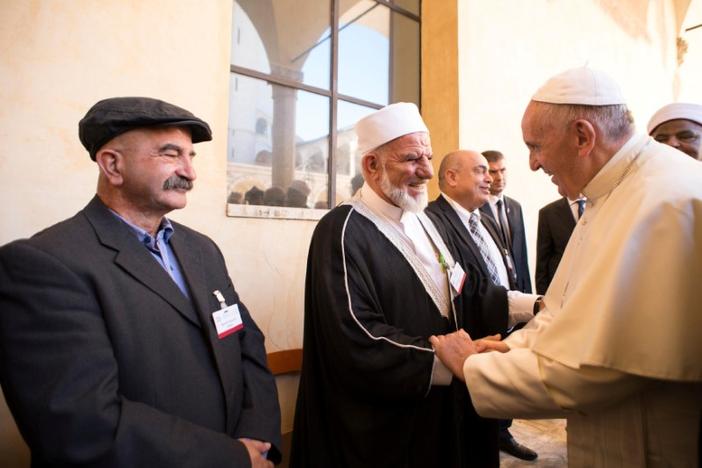 Pope Francis and leaders of other world religions said “No to War!” on Tuesday, vowing to oppose terrorism in God’s name and appealing to politicians to listen to “the anguished cry of so many innocents”.

Francis flew by helicopter to the central Italian hilltop city that was home to St. Francis, the 13th century saint revered by many religions as a patron of peace and nature and a defender of the poor.

The head of the Roman Catholic Church closed a three-day meeting where about 500 representatives of Christianity, Islam, Judaism, Buddhism, Hinduism, Shintoism, Sikhism, Zoroastrianism and other faiths discussed how their members could better promote peace and reconciliation.

Francis, who delivered two addresses and shared meals with the leaders, said indifference to suffering had become “a new and deeply sad paganism” that caused some to turn away from war victims and refugees with the same ease as changing a television channel.

Near the end of the gathering, members of each religion prayed in a separate locations and then joined each other in a square outside the famous pink stone basilica where St. Francis is buried.

Prayers were said for the victims of war, including in Syria and Afghanistan, and for the refugees fleeing the conflicts. A woman refugee from Aleppo now living in Italy told the pope at final gathering “my heart is in tatters”.

“Only peace is holy, and not war,” the Argentine-born pontiff said.

In a final appeal that key representatives signed and gave to children from around the world, they vowed “to oppose every form of violence and abuse of religion which seeks to justify war and terrorism.”

“No to war! May the anguished cry of the many innocents not go unheeded. Let us urge leaders of nations to defuse the causes of war: the lust for power and money, the greed of arms’ dealers, personal interests and vendettas for past wrongs,” the appeal said.

The narrow, cobblestone paths of Assisi echoed with the sound of different languages when Shinto priests in red-and-white robes crossed paths with rabbis in black and Muslims in white as each group converged outside St. Francis Basilica to join the Christians.

Speaking during the Christian service, Francis said the world could not ignore “our brothers and sisters, who live under the threat of bombs and are forced to leave their homes into the unknown, stripped of everything”.

“Who listens to them? Who bothers responding to them? Far too often they encounter the deafening silence of indifference, the selfishness of those annoyed at being pestered, the coldness of those who silence their cry for help with the same ease with which television channels are changed,” he said.

The event was held to mark the 30th anniversary of the first such encounter hosted by the late Pope John Paul in 1986.