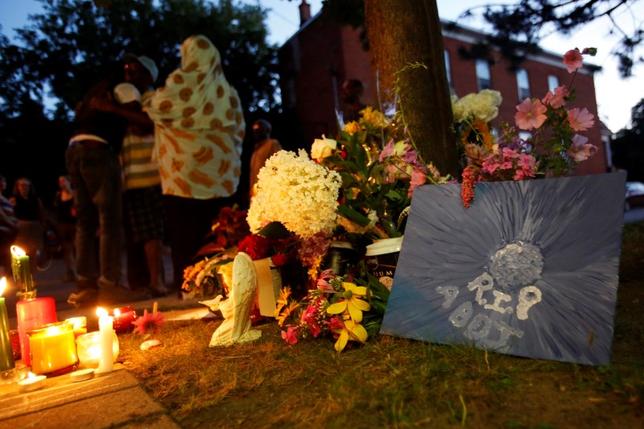 People embrace near a memorial for Abdirahman Abdi, a Somali immigrant to Canada who died after being hospitalized in critical condition following his arrest by Canadian police, in Ottawa, Ontario, Canada, July 26, 2016.
REUTERS/CHRIS WATTIE

More than 500 people rallied in Canada’s capital on Saturday to protest the death of a mentally ill black man following an arrest, marching against what they see as race-based police brutality in a country that prides itself for being tolerant.

Abdirahman Abdi, 37, died on Monday. Witnesses told local media he was beaten by Ottawa police officers who responded to calls of a disturbance.

His death echoed events in the United States, where a string of killings of black men by police and allegations of brutality and racial bias have sparked protests.

Protesters chanted “Black lives matter!” as they started marching, a reference to the U.S.-founded anti-police brutality movement, which has an official chapter in Canada.

“They murdered him! Enough is enough!” the protesters chanted as they approached the Ottawa police headquarters, where the march ended in the late afternoon.

Organizers had said they would respect the wishes of Abdi’s family for the event to be peaceful, and while some protesters were so angry that others had to calm them down, none crossed the police barricade.

Police said there had been no arrests.

Abdi’s family spoke briefly before the march, thanking supporters, although organizers have said they do not want to be interviewed.

The family held Abdi’s funeral on Friday, which was attended by at least 600 people, including Ottawa Mayor Jim Watson and other local politicians.

The province of Ontario’s police watchdog, the Special Investigations Unit, is looking into the circumstances surrounding Abdi’s arrest. Some advocates have called for criminal charges to be filed.

There have also been calls for a probe into whether race was a factor as advocacy groups voiced concerns over police violence against minorities.

In a statement, organizers of Saturday’s rally called for the officers involved in Abdi’s arrest to be put on unpaid leave, for all officers to wear body cameras, and for a review into how they deal with minorities and people in distress.

The Canadian Broadcasting Corp reported one of the officers had been taken off patrol and that the other has been on leave. It was unclear whether that leave was paid or unpaid.

(Reporting by Patrick Doyle in Ottawa; Writing and additional reporting by Ethan Lou in Toronto; Editing by Sandra Maler)

One thought on “Enough is Enough”