I found this on the “A Mighty Girl” Facebook site, a story of a truly remarkable, brave woman who, during World War II, was so ruled by love that she saved thousands of Jewish children.

I think, in today’s world where hate is dominating our lives, news and elections, we could all learn from her goodness and love. 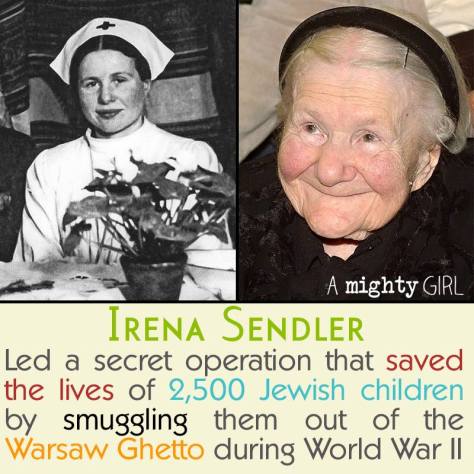 A Mighty Girl
February 15 at 10:15am ·
Today in Mighty Girl history, Irena Sendler — one of the great, unsung heroes of the WWII who led a secret operation that successfully smuggled 2,500 Jewish children out of the Warsaw Ghetto, saving them from almost certain death — was born in 1910.
Sendler was a Polish Catholic nurse and social worker who began aiding Jews as early as 1939 after the Germans invaded Poland. At first, she helped to create false documents for over 3,000 Jewish families and later joined the Zegota, the underground Polish resistance organization created to aid the country’s Jewish population.
In 1943, Sendler became head of Zegota’s children’s division and used her special access to the Warsaw Ghetto, granted to Social Welfare Department employees to conduct inspections for typhus, to set up a smuggling operation. She and her colleagues began secretly transporting babies and children out of the Ghetto by hiding them in an ambulance with a false bottom or in baskets, coffins, and even potato sacks. The children were then given false identities and placed with Polish families or in orphanages. To allow the children to be reunited with any surviving relatives following the war, Sendler buried lists containing the identities and locations of the children in jars.
After rescuing over 2,500 children, Sendler was arrested by the Gestapo, tortured and sentenced to death. Fortunately, Zegota was able to bribe the German guards as she was on her way to execution and she was forced to live in hiding for the remainder of the war. In 1965, Sendler was honored by Yad Vashem as one of the Polish Righteous among the Nations for her wartime efforts. She passed away in 2008 at the age of 98.
A fascinating part of Sendler’s incredible story is that it may have been entirely lost to history except for the impressive research efforts of several high school students in Kansas. In 1999, high school teacher Norm Conard encouraged three of his students, Megan Stewart, Elizabeth Cambers, and Sabrina Coons, to work on a year-long National History Day project. Starting with a short news clipping that mentioned Sendler, the girls conducted a year-long investigation into her life and, ultimately, wrote a play about Sendler entitled “Life in a Jar.”
The play ignited interest in Sendler’s story and it has been performed hundreds of times across the US, Canada, and in Poland. The young researchers also had an opportunity to meet Sendler in Poland in 2001; the forgotten hero whose amazing story they helped bring to light.
If you’d like to inspire your kids with Irena Sendler’s amazing story, we recommend the following titles for young readers:
– “Jars of Hope:How One Woman Helped Save 2,500 Children During the Holocaust” for ages 7 to 11 at http://www.amightygirl.com/jars-of-hope
– “Irena Sendler and the Children of the Warsaw Ghetto” for ages 8 to 11 at http://www.amightygirl.com/irena-sendler
– “Irena’s Jar of Secrets” for ages 6 to 10 at http://www.amightygirl.com/irena-s-jars-of-secrets
– “Irena Sendler: Bringing Life to Children of the Holocaust” for ages 10 to 14 at http://www.amightygirl.com/irena-sendler-biography
For an excellent book about Sendler’s life and the Kansas students’ project to bring her story to light, we highly recommend “Life in a Jar: The Irena Sendler Project” for ages 13 and up at http://www.amightygirl.com/life-in-a-jar-the-irena-sendler-…
There have also been two films produced about Sendler: “The Courageous Heart of Irena Sendler,” starring Anna Paquin, for ages 13 and up http://www.amightygirl.com/the-courageous-heart-of-irena-sendler) and a documentary, “Irena Sendler: In the Name of Their Mothers,” for ages 12 and up (http://www.amightygirl.com/irena-sendler-in-the-name-of-their-mothers).
And, for more books for children and teens about girls and women who lived during the Holocaust period — including stories of other heroic resisters and rescuers — check out the recommendations in our blog post for Holocaust Remembrance Week at http://www.amightygirl.com/blog/?p=2726

May we all be able to get past the hate and bigotry and walk in a world filled with people who practice  compassion and love. May we all have the courage of our convictions and not settle for just walking through this life asleep. May we all begin to take baby steps toward peace and acceptance. Ready to care about others and to stand up for those who can’t help themselves.