The beauty of Autumn is a favorite of many people. In the mountains, the light is amazing and the air is so fresh. It is as if Monet colored the world. Enjoy.

a blog of faith

I just got back from a trip to Palestine

I visited the West Bank once before in the late 1990’s while covering a story about genetics. I worked with both Israelis and Palestinians, photographing a school for the deaf. Of course I knew of the conflicts between the two groups, but the school was a rare example of cooperation and I wasn’t there long enough to absorb the complexity of the issues.

This trip was different.

I am still trying to comprehend the politics driving tensions between two groups of people with long histories who believe in God.

The main expression of this tension that I encountered was the restrictions on movement. As an American I take freedom of movement in our huge country for granted, knowing that I can…

Conversation about the thousands of Americans in prison. Should they all be there?

“Every ten or eleven people that you meet, someone is going to either know someone in prison, has been in prison with a record, or you met them and they are going off to prison,” says Michael Stoll, co-author of Why are so Many Americans in Prison?

ReasonTV’s Tracy Oppenheimer sat down with Stoll to discuss why incarceration rates and associated prison costs in America have exploded in the last few decades, and possible ways to reform the system.

“That increase [in incarceration rates] that we saw, 80 percent of that through our analysis, was driven by policy changes, not by the increased criminality of citizens in the United States,” says Stoll. “One of the things that I think needs to be done—and we know that this is politically difficult—is there has to be reform in sentencing.”

Edited by Tracy Oppenheimer. Camera by Zach Weissmueller and Sharif…

There are those who still carry hatred in their hearts. Harmony, Barbara

Barking In The Dark

The other evening laundries in and around our nation’s capital, as well as those of the very finest hotels, were kept buzzing deep into the early morning hours in a feverish attempt to get all the necessary sheets laundered, starched, and ironed, in order that the many delegates to the ultra-conservative Republican Values Voters conference could appear presentable.

“One always desires to wear a freshly laundered white sheet, and in that vein, I should personally like to commend Ah Fong’s over on K Street for their excellent ironing abilities. Those chinks really can press a suit,” gushed one attendee.

The early morning seminars were well attended, especially the ones on “Should women really be allowed to vote?” “The fundamentals and mastery of the goose-step,” And the Rick Santorum-led discussion on “The link between Karl Marx and contraceptives.” The morning’s most popular seminar, the Michele Bachmann moderated “How to hide a…

Another child is a victim of gun vioence.

Mariame Kaba, founding director of the Chicago community organization Project NIA, examines how violence is depicted, in an article for her blog Prison Culture. 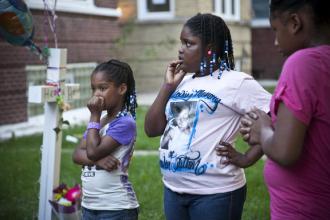 YOU MIGHT be forgiven if you thought that interpersonal violence (particularly homicides) among youth in Chicago was at an all-time high, rather than at one of its lowest levels in 20 years. The headlines blare that Chicago is a “war zone.” We are told that we are living in “Chiraq,” “Chiganistan,” “Terror city”–take your pick. Our frame is all war, all of the time.

In fact, a friend posted a photo of a poster that he saw in the South Loop (a fully gentrified community) just a few days ago advertising an art exhibition sponsored by Home Depot titled “Finding the Lost Childhoods of Chiraq”, where the organizers label…

Excellent blog. Take a minute and read it.

This has been my experience. Peace, Barbara

Very inspirational and it seems to me that women have to do these more often than the average man.

This is a very good blog for all of us to read.